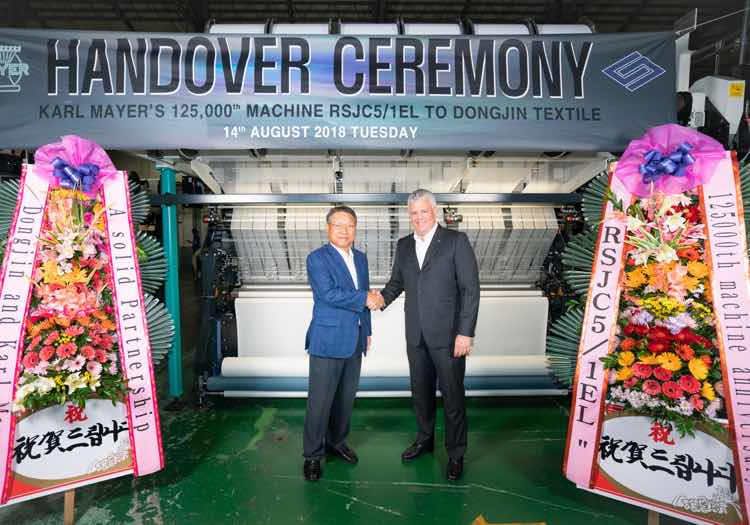 Busan - As the 125,000th Karl Mayer machine rolled off the production line, the warp knitting machine builder was able to highlight its long-standing partnership with one of South Korea's leading textile firms.

Dong-Jin Textile is one of the most well-known players in the sports shoe fabric sector and works for big brand names worldwide. This company has its headquarters in Busan, Korea, and, just like sports men and women, speed and agility are what have made it successful. This manufacturer also demands the same high performance of its production machines. In the spring of 2018, Dong-Jin Textile expanded its production capacity with the acquisition of one of Karl Mayer’s newest machines. This new jacquard raschel machine has been specifically modified and offers maximum patterning flexibility. It operates at a unique speed of 1,200 min-1 and represents the 125,000 machine to be delivered by Karl Mayer, a measure of the company’s high level of success.

This high-speed machine was sent to the customer’s site on 14 July and immediately went into production, without first undergoing processing trials in the customer’s research department, which had been the original plan.

Dong-Jin Textile and Karl Mayer have been working together for 50 years. The company founder, Byung Kil, Choi and his son, Woo Chul, Choi, who now manages the company, have bought more than 250 warp knitting machines – exclusively from Karl Mayer. Over the decades, the company has invested in high-speed tricot machines, double-bar and jacquard raschel machines as well as warping machines.

The machines are operating in several factories in South Korea and Vietnam with the plans also in the pipeline to being manufacturing in Indonesia from the second half of 2019.

Dong-Jin Textile manufactures shoe fabrics for the sports industry and is one of the biggest global suppliers in this sector. This company is also one of the biggest in the country’s textile sector. It has a workforce of 600 and also uses a large number of fabric producers acting as subcontractors in the southeast of the Korean Peninsula especially.

Underpinning this success has been exceptional closeness to the market. The president, Woo Chul, Choi, has excellent contacts with the brand names operating in the sports shoe sector, and provides them with textile solutions so that they are always one step ahead. This entrepreneur has demonstrated his pioneering spirit in his trendsetting collections. He has taken new paths with great decisiveness. “I greatly value Mr. Choi as a business partner. He has a phenomenal knowledge about warp knitting. It is amazing that the president of such a company knows so many details about our machines. He is able to make quick decisions and always keeps his word,” said Rainer Mueller. Karl Mayer’s Sales Director for Asia who deals directly with the president when handling machine projects. "He relies on high-tech machines to produce his innovative textiles – on the machines manufactured by Karl Mayer."